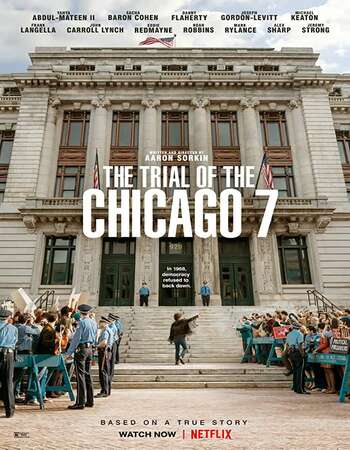 Story line: In Chicago 1968, the Democratic Pary Convention was met with protests from activists like the moderate Students for a Democratic Society led by Tom Hayden and the militant Yippies led by Abbie Hoffman and Jerry Rubin, which led to violent confrontations with the local authorities. As a result, seven of the accused ringleaders are arraigned on charges like Conspiracy by the hostile Nixon administration, including Bobby Seale of the Black Panthers who was not involved in the incident. What follows is an unfair trial presided by the belligerent Judge Hoffman (No relation) and prosecuted by a reluctant but duty-bound Richard Schultz. As their pro bono lawyers face such odds, Hayden and his fellows are frustrated by the Yippies’ outrageous antics undermining their defense in defiance of the system even while Seale is denied a chance to defend himself his way. Along the way, the Chicago 7 clash in their political philosophies even as they learn they need each other in this fight.